Guy Gonzales said he felt frustrated with the fitness and health industry in 2017 when he was retiring from a corporate job he had worked at for more than 25 years. During that time Gonzales went to the gym five times a week for 90-minute sessions. But he said he was still not finding the results he wanted.

A friend then told him about Utopia Food + Fitness.

Utopia’s concept is a strengths-based workout, twice a week for 20 minutes. Along with the workout, clients follow a nutrition plan with ready-to-eat meals, he said.

Gonzales said he did not believe that could work. But he tried it and his body fat went from 19% to 11% in six weeks.

“It was unbelievable,” Gonzales said. “I was blown away.”

Gonzales joined Utopia’s team as an investor and advisor. Now, he is CEO of Utopia Food + Fitness.

Utopia has locations in Plano and Preston Hollow. A Southlake location opened in 2017 before moving to Commerce Street this summer. Memberships are $149 a month, which includes two workouts a week and $40 of credit toward meals, Gonzales said.

Utopia’s fitness and nutrition plans are tailored to each individual. Gonzales said everyone’s body is different, and plans have to be customized to each person.

For nutrition, clients select meals that have a balanced ratio of protein, fat and carbohydrates. Clients choose breakfast, lunch, dinner and two snacks. Gonzales said the meals can be ordered online and picked up at Utopia during the workout session.

He said the majority of someone’s health comes from what a person eats. In a world of convenience with fast food and takeout, Gonzales said it can be difficult to eat healthy.

“Nutrition is a big portion of it,” he said. “Even if you go to the gym, and you work out really hard, the missing component is, ‘What do you eat?'”

Workouts are strength-based and supervised by a trainer. Each exercise machine works separate muscle groups to achieve a balanced workout and build muscle, he said.

“Most people hate cardio,” Gonzales said. “It’s not a great use of time, right?”

On average, he said people who come to Utopia have tried 16 different diets or workout plans. Everyone’s reason for wanting to make a change is different, Gonzales said. He has seen clients wanting to get in shape before their wedding or clients who are grandparents and want to be with their grandchildren a little bit longer.

“Our mission is to deliver people’s ‘Why?’ and help them improve their lives, Gonzales said.

Build muscle — Clients are put on a program to workout twice a week in 20-minute sessions to lengthen and strengthen muscles. 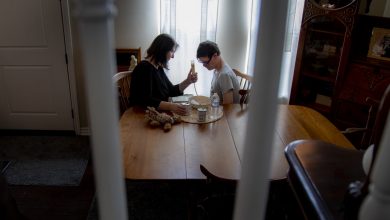 For this family, the COVID-19 threat hasn’t gone away