Vaginal delivery was associated with increased risk for food sensitization in infancy, with longer labor durations also promoting food sensitization development, according to a study published in Annals of Allergy, Asthma & Immunology.

This relationship between vaginal delivery and food sensitization remained consistent even when the number of siblings was considered, the researchers said.

“The potential effect of delivery mode on the risk of childhood allergic disease development remains unclear, and the current evidence is conflicting,” Tetsuhiro Sakihara, MD, of the department of pediatrics at Heartlife Hospital in Nakagusuku, Okinawa, Japan, told Healio.

While some reports have indicated that caesarean delivery can elevate the risk for food sensitization and food allergy when compared with vaginal delivery, others have found no such associations, Sakihara said.

“Furthermore, maternal and infant stress during labor may affect prenatal immune development by reducing naive regulatory T-cell numbers, but little is known about the relationship between labor duration, which can be indicative of stress exposure, and the risk of food sensitization,” Sakihara said.

To bridge these gaps in the literature, Sakihara continued, the researchers conducted the study to assess whether delivery mode and labor duration affect the risk for developing food sensitization in infancy.

The study’s design and results

The researchers analyzed data from the Strategy for Prevention of Milk Allergy by Daily Ingestion of Infant Formula in Early Infancy (SPADE) study, which involved four hospitals in Okinawa between Jan. 1, 2017, to Aug. 31, 2019.

Between the first and second month, infants were randomly assigned to a group that ingested 10 mL or more of cow’s milk formula (CMF) each day or to a group that avoided CMF, both through age 6 months.

The infants born through vaginal delivery tended to have a higher gestational age, with a higher proportion of them not ingesting any CMF in their first 3 days of life. Also, they had a lower parental age at delivery and lower maternal BMI before pregnancy.

The researchers, however, did not find any significant differences in sensitization incidences to cow’s milk, wheat or soy.

“The incidence of food sensitization development by 6 months of age was significantly higher in vaginal delivery-born infants than in CS-born infants,” Sakihara said.

“This positive association between vaginal delivery and food sensitization development remained statistically significant even after adjusting for other parental, perinatal and environmental factors,” he continued.

The researchers said they found a significant association between longer labor durations and a higher proportion of infants with food sensitization as well (P = .008).

Although they did not analyze why allergic diseases developed in these infants, the researchers suggested influences including exposure to the maternal vaginal microbiome, indications for cesarean delivery and maternal dietary factors and gut microbiome during pregnancy.

Also, the researchers noted the possibly temporary nature of the effects of the mode of delivery on the diversity and colonization of an infant’s gut microbiota, which may be affected by antibiotic exposure, early skin-to-skin contact, breastfeeding and the introduction of complementary foods.

The researchers suggested that these confounders should be considered in future research.

It is interesting to note that antibiotic use was significantly higher in the vaginal delivery group and that cow’s milk consumption was significantly higher in the cesarean section group, which could have influenced outcomes, but the authors have taken this into account in their statistical models. There is, though, still a question about the role of antibiotic use in the increased risk seen in vaginal delivery as opposed to just the mode of delivery.

We do know that usually cesarean sections are associated with increased allergy risk, but many factors such as antibiotic use in pregnancy, during delivery and early life, as well as feeding and weaning practices, can also affect outcomes. In many circumstances, antibiotic use is higher in cesarean sections than in vaginal deliveries. The reverse is reported in this paper, which makes the findings interesting.

We need to better understand the role of many factors relating to pregnancy, birth and early life and their role in the development of allergic diseases or, in tis case, sensitization.

We really need better studies that can address the full picture, rather than pieces of a puzzle, by looking at maternal diet in pregnancy, environmental exposure and medication use, mode of delivery, early life feeding and weaning practices and environmental exposures underpinned with mechanistic data that, at the bare minimum, should include maternal and infant microbiome data.

The study is surprising to me because traditional teaching tells us that a diverse microbiome like that afforded to babies after exposure during a vaginal delivery is beneficial in the face of allergic disease. In this case, the researchers acknowledge traditional thinking, but also highlight the pro-inflammatory processes during delivery that can or may change the risk for the development of diseases such as a food allergy.

This study found babies with vaginal delivery, and especially babies born vaginally to moms with protracted labor, had increased risk. This suggests other theories that may contribute to the development of allergic disease — how possibly stress hormones such as cortisol, for example, could potentially be a mediator in the development of risk for atopic disease.

However, there are some things that moms and dads can control in a baby’s life when it comes to the risk for developing a food allergy, and some things they cannot. Moms do not always have control over the method of delivery of a baby. But after a baby is born, the introduction and routine exposure to common allergens in the gut through feeding is one thing parents can do to reduce food allergy sensitization or the development of a food allergy. Another thing parents can do is keep their baby’s skin barrier intact. Babies with eczema are at a 600% increased risk for developing a food allergy. We know that the so-called “5 D’s” — dry skin, a lack of diverse diet, decrease in microbiome, a lack of exposure to things like dogs or other environmental exposures and a lack of vitamin D — may all be mediators in allergic illness.

In the case of things parents can control, it does not matter if the mom had a vaginal delivery or a cesarean birth. The recommendation for the introduction of various common allergens is universal across the board. And while some studies suggest changes in the microbiome during a vaginal delivery are protective, this study shows that protective effect could be deleterious because of the stress involved in vaginal delivery.

As a pediatrician interested in practical advice, after a baby is born, I always recommend that parents and caregivers talk to a pediatrician about how to take care of their baby’s skin and how to ensure their baby is introduced to common allergens early and often in infancy . 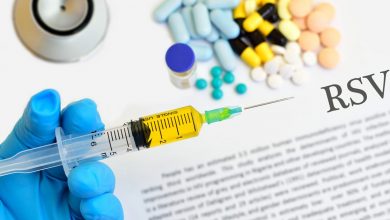