Disclosure:
Vincent reports on a grant from the International Society of Atopic Dermatitis, a three-month research grant from Pfizer, and support from the NIHR School for Primary Care Research. Please refer to the study for all relevant financial information from the other authors.

According to a study published in Clinical & Experimental Allergy, international guidelines on milk allergy in primary care may encourage overdiagnosis by labeling normal infant symptoms as possible cow’s milk allergy.

“We looked at the frequency of symptoms that guidelines have associated with non-IgE-mediated cow’s milk allergy in children,” author Rosie Vincent, MBChB, a clinical specialist in dermatology at Bristol Royal Infirmary, told Healio .

“The study was triggered by increasing diagnoses of non-IgE-mediated cow’s milk allergy despite an actual prevalence of around 1% and increasing prescriptions of specialty milk in infants,” said Vincent, who is also an honorary clinical research fellow at the University of. is Bristol.

Researchers performed a secondary analysis of data from the Inquiring About Tolerance (EAT) study, which looked at whether including allergenic foods early in an infant’s diet reduced the risk of allergy to that food.

The 1,303 healthy infants in the cohort were exclusively breastfed up to an age of at least 3 months. The researchers randomly assigned them to a standard induction group (SIG) or an early induction group (EIG).

The researchers saw the infants at clinic visits at 3 and 12 months of age. The parents also completed monthly questionnaires on the general health of their infant and the consumption of allergenic foods until the infant was 12 months old.

In the questionnaires, the parents were asked whether their infant had had any side effects on food, such as eczema, breathing problems or gastrointestinal problems, since the 3-month assessment or since the previous survey.

“The main finding of the study is how common the symptoms listed in the iMAP guidelines are in non-IgE-mediated cow’s milk allergy,” said Vincent.

In particular, 25% of families reported two or more mild to moderate non-IgE cow’s milk allergy symptoms each month between 3 and 12 months of age, and 1.4% reported severe symptoms. The researchers found that these numbers peaked at 3 months of age (easy-medium, 38%; severe, 4.2%), when the infants were not yet consuming cow’s milk.

At 12 months of age, 73.6% of the infants had multiple mild to moderate symptoms and 9.3% had multiple severe symptoms, for at least one of the months.

The mean monthly reporting of milk-related symptoms was 2.2% between 3 and 12 months, with the mean for individual symptoms ranging from 0.2% for blood in the stool to 45.8% for vomiting, with 78.1% of infants peaked at 3 months of age.

Colic, vomiting, and abdominal discomfort were most common around 3 months of age and decreased with age, while food reversion and aversion increased in the first 12 months. Diarrhea and constipation also increased in infancy, while skin symptoms were more stable.

Fewer participants reached the threshold for severe symptoms of cow’s milk allergy, with abdominal pain reaching the highest percentage at 13.1% after 3 months. Most serious symptoms had a monthly prevalence between 1% and 2%.

“These results suggest that the vast majority of children with these symptoms do not have a cow’s milk allergy,” said Vincent.

After 6 months, the researchers observed no difference in the proportion of children with two or more mild to moderate symptoms between those who consumed and did not consume cow’s milk (29.5% vs. 35.3%) or between those with or without baseline eczema (15.8.). % versus 16.7%). This missing difference persisted when the researchers examined infants with two or more severe symptoms (consumption vs. no consumption of cow’s milk, 2.2% vs. 1.1%; eczema, 1.1% vs. 1.3%) .

The researchers suggest that robust data should support guidelines to prevent the harms of overdiagnosis, which outweighs the harm of a missed and delayed cow’s milk allergy diagnosis that they seek to prevent.

“Doctors should use this evidence as a reference. The incidence of these symptoms is found in a representative group of normal, healthy infants. Physicians should also interpret such guidelines cautiously to avoid medical treatment for normal infant symptoms, which in turn leads to unwarranted prescriptions for specific infant formula, at a cost to families … and adversely affect breastfeeding rates, “Vincent said.

In addition, the researchers found that mild, transient, or isolated symptoms should not be overinterpreted and the diagnosis should be considered when symptoms are multiple, significant, persistent, and resistant to treatment. Parents, the researchers added, should be encouraged to appreciate the normality of common infant symptoms.

“It is important not to suspect a cow’s milk allergy unless there are good reasons. Physicians should be careful not to use the guidelines for non-IgE-mediated cow’s milk allergy without considering whether the infant is experiencing only normal infant symptoms, ”Vincent said.

Research in this area should continue, Vincent added.

“In the absence of a simple diagnostic test for non-IgE cow’s milk allergy, more research is needed to determine which combination of symptoms are both specific and sensitive to the condition,” she said.

Rosie Vincent, MBChB, can be reached at rosievincent3@nhs.net or on Twitter @RosieVince. 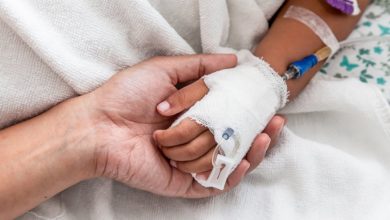 Steroids may reduce risk of death after severe COVID-19 hospitalization