A reader asks: “I think my wife is cheating on me. She comes home from her office hours later than usual. She checks her phone constantly. Should I confront her?”

Another writes: “My husband is just home from Afghanistan. He has huge anger issues. In the last two weeks, he’s put two guns under our bed. What’s going on? Should I confront him?”

A distressed mom writes: “My 14-year-old son is hanging out with kids everyone knows are using drugs. He seems distant and vague lately. We think he’s smoking pot or worse. Should we confront him?”

The answers are “no,” “no,” and “no.” As anxious and concerned and upset as all of these people are, confrontations aren’t going to get them what they hope for. Why? Because confrontations tend to shut down problem-solving. A heartfelt conversation is a much more effective approach.

Let’s go to my Merriam-Webster Collegiate Dictionary. A confrontation is, yes, a “face to face meeting,” but it’s also a “clashing of forces or ideas.” A conversation is “an oral exchange of sentiments, observations, opinions or ideas.”

I know which one I’d rather be invited to participate in. More important, research shows that when people are in a fight (a confrontation), they get defensive. When they are approached with respect and curiosity (a conversation), they are more likely to engage in a serious exchange of ideas and are more open to change.

Here are some of the reasons that conversations are more helpful than confrontations:

Confrontations are usually fueled by anger. Somebody is usually confronting another because she or he is upset with the other’s behavior and angrily demands a change.

Conversations, on the other hand, are fueled by curiosity. One person is wildered or confused by something the other is doing and simply asks what it is about. There is no layer of anger to get through before getting to the issue.

Confrontation: He thinks she flirts too much at parties with other men. He angrily accuses her of coming on to the other guys and tells her she can’t talk.

Conversation: In the same example, he asks her what the apparent flirting is about and is surprised to find out that she thought he understood that she was just being playful. After all, she says, she does always go home with him – and wouldn’t have it any other way.

Confrontations have an aura of a judicial proceeding. The confronter is the accuser and the judge. The confrontee is the defendant. This doesn’t do much for the relationship. When confronted, people often feel “nailed.” Even if there is a reasonable explanation for the issue or behavior they are being asked to explain, it is difficult to put the tone of confrontation aside.

It’s hard enough to offer another point of view without first having to get past hurt and anger. Conversations frame a problem as something to be solved. This frames the situation as a problem to be solved.

Confrontation: He comes home late for the fourth night in a row. She meets him at the door with an accusatory “Where have you been and what have you been doing?”

Conversation: She could have said, “When you are late so much, I get anxious and a little insecure. Can we talk about it?”

Confrontations have an element of moral superiority. Usually the confronter feels they have the higher ground. That, of course, puts the confrontee on the defensive. Now there are two issues to deal with. Conversations happen between equals. Neither person acts like he or she knows better, is more ethical, or is supported by a higher moral authority. Instead, the people involved talk respectfully together about whatever is making things difficult between them.

Confrontation: He accuses her of cheating. She protests. He says she is no good. She, who in this case is innocent of any betrayal of the relationship, feels not only unjustly accused but judged as morally inferior.

Conversation: He tells her he is feeling secure and asks for some reassurance.

Confrontations shield the confronter from any responsibility. The confronter feels and behaves as if she or he had nothing to do with the situation. Often enough, problems in a relationship take two. Conversations say “we’re in this together.”

Confrontation: He works long hours at the expense of the relationship. She puts up with it until she can’t stand it anymore, then blows up about how he is putting his job before their family. He feels injured because he thought she understood that he was trying to make a good life for both of them. And around it goes.

Conversation: She acknowledges that he is working hard to support the family but also doesn’t want him to miss out on sweet time with her and the kids. He feels appreciated but then thinks about what his long hours are costing him.

Yes, sometimes a confrontation is appropriate and necessary. Someone has done something or has done many things that are absolutely unforgivable, in which case a confrontation may be exactly what is required for the injured person to regain dignity and self-respect. A person who has been abused and humiliated by his or her partner or anyone else has every right to be angry, to judge the situation as unfair and hurtful, and to demand change. A person who has been sexually abused has every right to confront her or his abuser and insist on the right to an apology and restitution.

My only caution in such situations is that the abused person who is doing the confronting should do it in a way that is safe. Confrontations rarely change a chronic abuser, bully, or user and may in fact invite more abuse. If that’s the case, the best thing to do is to get out of the situation and do your own therapeutic work independently of the abuser.

But when there has been no abuse or there is no clear evidence of wrongdoing, a conversation is more likely to lead to change. Conversations invite cooperative problem-solving and collaborative decisions.

Let’s go back to the cases at the beginning of this article. If there is a possibility that what appears to be wrongdoing is innocent (like, possibly, the wife in no. 1) or if the upsetting behavior is coming from personal trauma or pain (like the veteran) or an adolescent needs to be set on a better path (like the 14-year-old), confrontations won’t be helpful. Conversations will preserve the relationships while the people involved work toward understanding and solutions. 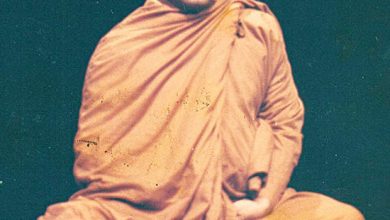 Venerable Bhante Homagama Kondanna Maha Thero, an international monk and a remarkable disciple of the Buddha – The Island

30 Relaxing Meditation Retreats Around the World