Letters to the editor help me verify my facts. Here are a couple that recently walked in:

“I think you let your readers down in your last column: ‘Should we be afraid of fructose?’

“The scientific studies are very clear: fructose in connection with most whole foods is fine. It is the fructose in high-fructose beverages that contributes to the development of metabolic syndrome and obesity in children and adults … “

Did you purposely not mention high-fructose drinks in your review? How could you not mention that? Thanks for your answer.

Here’s what I wrote: “A recent analysis found that consuming too much fructose from sugar-sweetened beverages increases your risk of metabolic syndrome, a condition that can lead to diabetes and heart disease. On the other hand, researchers report that eating whole fruits or drinking no more than 250 ml of 100% fruit juice per day can actually protect against the same metabolic syndrome. “

I wanted to use the term sugar-sweetened drinks instead of high fructose drinks for the following reasons:

Research has shown that high intake of sugar-sweetened beverages contributes to metabolic syndrome. These include those sweetened with all kinds of sugars, including sucrose and high fructose corn syrup.

On the other hand, ingesting fructose from other foods like fruit, fruit juice, honey, and yogurt has been shown to protect against metabolic syndrome, according to a recent analysis.

Michael, who reads the column in the Daily Hampshire Gazette, wrote to interview a column about pickling turkey (soaking the bird in a salty liquid before roasting):

“There is a quote (in the column) that says, ‘After 12 hours, 4 ounces of white meat had 150 milligrams of sodium while the dark meat had 235 milligrams.’

Does this mean that after salting this was the total in each serving size, or was this added to the existing sodium levels in the turkey? Earlier in the article it was explicitly mentioned that brine increases sodium levels, but I wanted to be sure it was correct in the later part.

Sorry for the confusion, Michael.

Yes, this refers to the amount of sodium added to the meat during the curing process. Suffice it to say that curing adds sodium to turkey meat and dark meats seem to be more absorbent than white meats. Fresh turkey starts out with less sodium than a more processed bird. And how much sodium is ultimately absorbed depends on the concentration of your brine and how long you soak it.

Barbara Quinn-Intermill is a Registered Nutritionist and Certified Diabetes Educator at the Monterey Peninsula Community Hospital. She is the author of “Quinn-Essential Nutrition” (Westbow Press, 2015). Email her at barbara@quinnessentialnutrition.com. 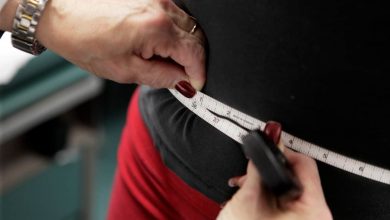 Opinion | The deadly Covid-19 pandemic is eclipsing another one – obesity

Increased risk of heart disease may be linked to stress hormone sensitivity: study